Teachers Assistant for Deaf and Hard of Hearing Children

My name is Alyssa Vera. I am a proud woman of Latin American decent, who cherishes her God-given ability to write with fluidity, accuracy, and a tone that brims over with conviction. I am a thriving writer who intends never to arrive at an end goal but to keep extending the limits of what is possible. I love painting with acrylics, writing and recording original music with my sister, and using American Sign Language to bridge the gap between the deaf and the hearing world. My latest obsessions are chocolate decadence scented candles, collecting vinyls, and pulling up to the beach in the Jeep with my friends. My gratitude to all of you is inexpressible to say the least, but THANK YOU for reading my work! 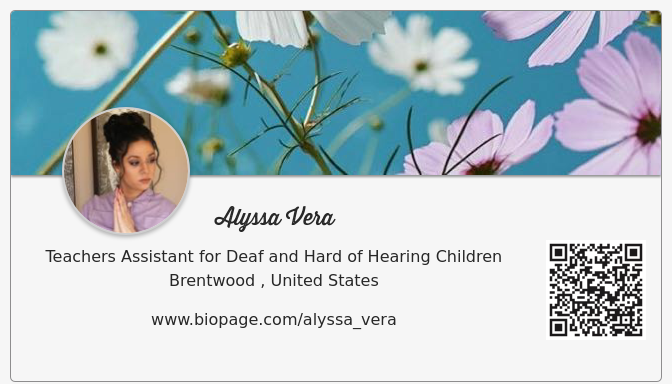 Walls. They were always blue. Always calm. Always comforting. I find my solace here. Away from the world, away from the chatter, safe.Safe from the scouring eyes of judgment. Everyone seems to own a pair. I am the exception. Walls that are thin. I hear conversations behind them. They are the voices of my mom and dad. I hear the bass shaking my walls. They are the basslines of my sister. She is gold to me. Walls that are blue because I love blue paint. The color blue takes me higher. It makes me feel like I am soaring. It brings me back to my elementary school years. I was a kid. Every room I lived in, blue; a vast ocean that didn't drown be, but instead hugged me. Blue walls remind me of music. Soothing music reverberating off of my blue walls. Rock'n'roll that calmed me. Soul pop that nurtured me. Worship that brought me to my knees in times of despair. I saw no way out. But the walls kept me close, as a mother presses her baby to her bosom. Walls remind me of perfume. My room, always saturated in fragrant vanillas and oftentimes sweet pea. Now, I am grown and I do not wear any of those sprays. Instead, the walls I live in smell of warm, white sands. I burn the waxes in my wax warmer to ease me some more. Walls. They remind me of the taste of my tears. Oh, how I've cried plenty. But every tear has healed me. It is like adding water to sand to make it stick. The tears were always the glue. They gave me structure, and substance. The salt in them has built me behind these walls that are my friends. Walls that carry me. Walls that could never contain the bigness of God, yet he still came to live behind them with me.

A Yellow Woman's Dream for Justice

We were in a barren city. The storms kept hitting. Nobody knew when they were coming next. Blackened sky. Disastrous rain. Wailing sirens. Police officers, yelling orders into their PA systems - their voices blaring through the speakers. Debris flying. Them: “Hands up!” Us: “Don't shoot!” Them: “Hands up!” Us: “Don't shoot!” Them: “Hands up!” Us: “Don't shoot!” Over and over and over again. We ran into the stores and warehouses, hiding under retail carts and equipment made of iron that might keep us safe but not for certain. We maneuvered the industrial carts from one side of the space to the other to escape the bullets....but they wouldn't stop. They came for us. They came for our skin. The bullets sinking into our yellow and tearing holes through our black. We were hurting; broken on the inside, but brave on the outside. We were angry but we were together. The flag waved tattered and tired in the background, grayed by the smog. When the war on the foreground was over we would walk, looking for younger children that didn't belong to us - not because we were covetous but because they were our allies. They looked ivory as bone, helplessly washed in glistening shades of white by the hands of God our maker. Some were painted a dark red. Others were dipped in bright yellows and fine golds. Most of the children were polished in the prettiest brown and black tones; a stony trail of ebony by the wayside. We walked. Then we sped. Then we ran. Them: “Hands up!” Us: “Don't shoot!” Them: “Hands up!” Us: “Don't shoot!” Them: “Hands up!” Us: “Don't shoot!” Again, we sought for cover, trying our best to remember the “duck-and-cover” protocol from our lock-down drill days in grade school. We were adults on the inside who knew righteousness apart from injustice but we wore the bodies of fifth graders, and seventh graders, and eighth graders. We were us, but the us from our youths, staring each other in the eyes as if to scream, “fight for your life! It is our God given right to live!” Imagine that? A God given right. The upmost right that not a single white man had the right to strip away, but he did so in plain sight because he could. Their stark hands collected the muscle memory of the last lynchings; their craving for the next victim....insatiable. We fought for the right to breathe the same air as these white law enforcement officers. We were not privileged enough. To them, black or yellow meant filthy and unpardonable. They counted us as unworthy. We hid for the sake of preserving our right to bleed red. They saw us. We owned our anger. They opened fire. The color of our skin didn't inspire the crime; it was the crime. They raged, offended that we were still awake. They seethed for fear that we were not yet left for dead in pools of our own blood. They wanted us asleep forever. They were scared of us, threatened by a beauty that challenged their white privilege. They called our skin dominant so their society made us inferior. We became a part of it, having no choice but to play the role of the weaker vessel. How did I not know that this series was on repeat for over 400 years? Yet, the world remained quiet about our dread. Instead of defending us, they eyeballed our ascent into a Heaven that called us home too soon. Glory demanded us. We carry on, filling up the streets as if nothing ever happened; traveling on threadbare feet that were tired of amounting to the stereotype that “all minorities do is run.” They blame us for running but it's the only option they offer us. We run until we see Heavens gates swing wide, shadow-less and full of acceptance that our prior world ruled we didn't deserve. God waits on the other side to meet us and we grow nervous, buckling before His bigness. Were we ready all along? Did He count us as so from birth? Either way, He doesn't shun us. He doesn't know how to, so instead He bear hugs us. Deep in my soul, I can feel hundreds of thousands of God's children fling their eyes open from the same nightmare, all at once and in different time zones. They feel like my friends. One, by one, by one, we wake up with a disturbed kind of energy that sends elastic waves from the Earth's epicenter to its opposite poles. We sense that the racists could feel the aftermath of our torment. “Why can't the nightmares remain nightmares?” we ask rhetorically. Our voices echo from different bedrooms. We ache for dreams only to wonder if they are worth writing down or fighting for. The media tells us, that we might not ever survive to see our dreams. They don't tell us verbatim of course, but the reports all end on notes that shrill with dissonance and screech with injustice. For the first time at age 26, I am unsettled by my indigenous features, alarmed that I am a double minority, who can't scrub the color off of my skin. I am Latina. I am a yellow woman. 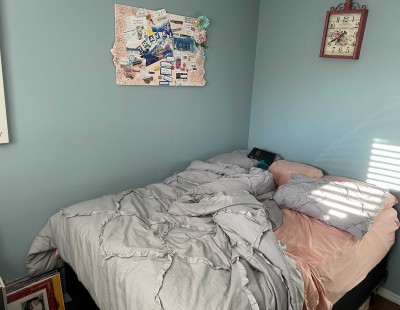 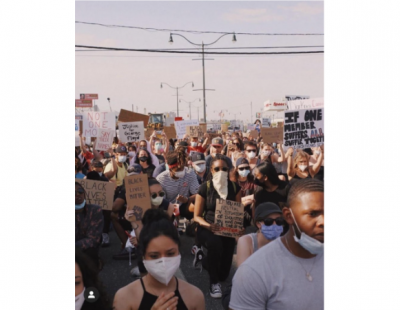 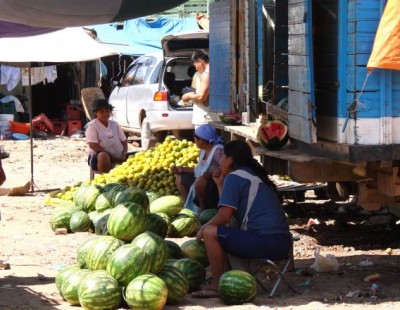 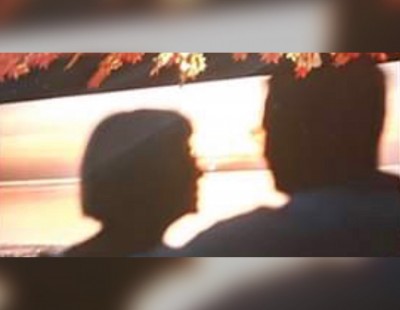