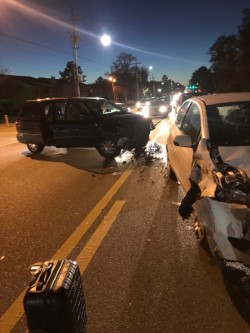 For three days I sat in front of my computer with an intense case of writer's block. Every idea I seemed to have was either too boring, too long, or too personal to bring myself to share. On November 26 at around 5:30 in the afternoon my big sister, my mom and I were in an awful crash resulting in the permanent demolition of our only vehicle. Right now, it is November 27 and I sit in bed writing about the experience I went through last night, feeling eager to share my story. We were on our way to the airport. My mom was on her way to Arizona for a three-day training involving her brand-new job. She was supposed to leave that Monday morning, but her flight had been delayed so we ended up rushing to get her out the door and, on her way, as soon as I got home from school. I hadn't eaten, and I was already feeling exhausted from the day, so I hung about the house doing as little as possible to refrain from getting yelled at. At around 5 o'clock we got a call from my little sister who had stayed after school for some reason. She said that she needed to be picked up. Now we were really in a rush. My mom stuffed the rest of her necessities in her backpack as my big sister rushed from the kitchen with a bowl of spaghetti in hand. “Eat this on the way Mom. We'll eat after we drop you off.” So, my mom took the bowl in her hand and we all packed into the van. It happened right outside our apartment complex, as we were pulling out. I was already upset about being dragged along and about a couple of other things that happened that night. As I was looking out of the window feeling tired and stressed when I saw the car coming. Coming up quick. I felt the car tip to one side before slamming back down. Slam down hard. It happened so fast, but we happened faster. My mom turned and asked if were okay. We didn't even stop to take in what just happened. The entire front of our car was gone. My sister, worried that the car might go up in flames instructed us to get out. I opened the door and stepped out onto to the road by my sister's side. We walked past the car who had smashed into us. The driver was a young girl. She stepped out of her own vehicle shaking and crying with her phone in hand. My sister called the police right away and told them where we were. The next couple of minutes were a blur, I stood there in the cold, while the fire truck drove up took our vitals, as the officer took statements from us and as my mom called all her friends trying to find someone to pick up my little sister. The tow truck came, someone brought my sister home and within minutes we ended up in the ER getting checked. It all happened so fast, I was in a daze by the time we returned home. My mom had missed her flight, our car was totaled, and we have no vehicle to get around. Things can only get better when you hit rock bottom right? Or could they possibly get worst? My mom had to pay a ticket and sent my sister to the police department to do so, she came back with the notice that they had a warrant out for her arrest, my mom, with all the things she has to do as a single mother had missed the appointment and missed the deadline for payment, she had to come in and get fingerprinted, and now my mom, who struggles every month to get us all our necessities plus manages to also give us some of our wants, now had this on her record. We were distraught, angry and sad all at the same time, she had planned to pay the ticket last month but had not received the child support money from my father on time. When my mom went in to take care of it, they cleared her, didn't take her finger prints and when we went to get her license back they hadn't even placed it under suspension. A big sigh of relief went through all of us, my sister suggested we grab a bite to eat and so we headed to grab some pizza. As we looked back on what happened in the last twenty-four hours my mom came up with her could have been worst theory. I thought to myself, “How? Everything that just happened seemed like it was the worst.” Well it seems that if they ran her driver's license in Phoenix they would have found that a warrant for her arrest had been issued and she may have been detained and someone would have had to fly out there and bail her out. If my mom had been driving the vehicle at the time of the accident it would have resulted in her being arrested here, but my sister who usually lets my mom drive had grabbed the keys this time. And how none of us got more than a light bruising after the ordeal when the entire front of our vehicle was totaled was a wonder to her. Her theory is that someone up there moved things around just so that she wouldn't end up on that flight. And after all that happened we're all still here, that's what you call resilience, that's what you call strength, that's what you call being a true survivor.

Writing Your Author Bio? Here Are 10 Great Examples The resume is dead, the bio is king 6 of the Best Professional Bio Examples We've Ever Seen