"There is no greater joy than to share what you love with those who appreciate it."—Bernard Jan

Bernard Jan is the pen name of an award-winning novelist and a poet from Croatia, and he has released four books in English.

A World Without Color is a true story of the last three days he spent with his cat, while Look for Me Under the Rainbow in a unique and gentle way sheds light on the plight of harp seal pups in Canada. It warms the heart of all readers concerned about our planet and its treasures. January River is a heartwarming cross-genre novel about five friends, one dog, and one river carrying a secret that will upheave their world. Cruel Summer is a gripping young adult cross-genre novel about an abused teenager from New Manhattan who only wants to skate, but they have other plans for him, and Postcards From Beyond Reality: The Selected Poems of Michael Daniels is a young adult poetry book written in character as the hero from his novel Cruel Summer.

His first two books were written at the beginning of the war in Croatia in 1991 amidst air alerts and illusory attempts when he wanted to believe and think that life is normal, that everything is all right with the world. He has published five novels, two novellas, and one book of poems in Croatian. Four of his books, including the book of poems, were translated into English.

His passion for music and entertainment resulted in his becoming a partner of Tom's Music Place, which was established in 2009 by his friend Thomas Carley Jr., whose objective was to raise the respect of music.

His desire to help others came to the fore during his years advocating environmental protection and advocacy of animal rights. He did volunteer work for the refugees because suffering does not know any borders. When it comes within your reach in your home, you simply have to do something. As part of his animal advocacy activities, it has been a great honor and pleasure to translate "Eternal Treblinka: Our Treatment of Animals and the Holocaust" by Charles Patterson into Croatian.

For more information, please visit his website www.bernardjan.com and connect with him through the links here https://linktr.ee/bernardjan. 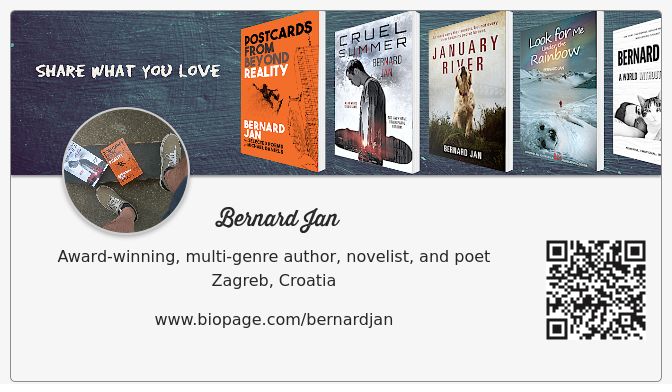 Postcards From Beyond Reality Paperback and Launch Days

On March 17, sooner than I expected, my paperback is also on Amazon. Three days before my eBook launch day on March 20, when you can download it and read it! Here are the links of English-speaking marketplaces where you can order Postcards From Beyond Reality: The Selected Poems of Michael Daniels and/or leave your honest review. Please don't forget that, because your reviews not only help Postcards to find its way to new readers but also help other readers to get value from your reading experience and honest thoughts and decide if my poetry book is the right book for them. Amazon.com paperback and eBook Amazon Australia paperback and eBook Amazon Canada paperback and eBook Amazon UK paperback and eBook Goodreads paperback and eBook BookBub eBook Jessica Bell designed an eBook and a paperback cover for my YA poetry book I wrote in character as the hero from my novel Cruel Summer, Michael Daniels. They look spectacular and reflect Michael's inner mind, which was teeming with the stark contrast of darkness and light. I will enroll Postcards From Beyond Reality: The Selected Poems of Michael Daniels eBook in KDP Select where you can read it for free, so don't miss that opportunity. Thank you all who helped me bring Michael's poetry book to life. I cannot mention all of you here, but you have my gratitude and sincere thanks in the Acknowledgements section in the book. If you are a representative of the media, please click here for the press release. Postcards From Beyond Reality: The Selected Poems of Michael Daniels and I are available for reviews, book tours, interviews. BJ Subscribe to my mailing list. Follow me on Twitter. Original post at https://www.bernardjan.com/post/postcards-from-beyond-reality-paperback-and-launch-days

Postcards From Beyond Reality Blurb and eBook Cover Reveal

The time has come for me to share my new happiness, my new eBook release announcement with you! Postcards From Beyond Reality: The Selected Poems of Michael Daniels is a young adult poetry book I wrote as a companion that is a sibling book to my novel Cruel Summer. Originally published in Croatian in a periodical Forum in 2003, Postcards From Beyond Reality: The Selected Poems of Michael Daniels will be released on Amazon on March 20, 2022 as an eBook and a few days later as a paperback! But you can pre-order it now! In this book of poetry, I dived into the mind of a teenage protagonist Michael Daniels from my novel Cruel Summer, writing about his dreams, longings, desires, traumas, passions. If that isn't intriguing enough, I hope my book description will be. *** His life has been a cocktail of melancholy, sorrow, and desire. When a skateboarder dips his pen into poetry, what will his passion create? After a lifetime of abuse and the tragic loss of his mother, NYC teen Michael Daniels needed an outlet. Despite his cheerful nature, his inner mind was teeming with the stark contrast of darkness and light. So, in this volume full of imagery and symbolism, his underground rhymes reflect days full of extreme sports, failed relationships, and nostalgic memories. Written by Bernard Jan in character as the hero from his novel Cruel Summer, this channeled view of the world is an extravaganza of extremes. And in its groundbreaking perspectives, you'll discover the cries of a heart longing to be understood. Buy this book of poetry and feel Michael's passion through these unusual literary postcards. *** I want to thank the authors from the Best Page Forward team who helped me with my blurb and Jessica Bell for the amazing book cover I am also presenting here. I hope you will embrace this book and treat it with love and affection. Please show some love to the Best Page Forward team and Jessica Bell by visiting their pages. And don't forget to pre-order my book on one of the links below and leave your honest review once I release it on March 20! Amazon.com Amazon Australia Amazon Canada Amazon UK Goodreads BookBub If you are a representative of the media, please click here for the press release. Thank you! BJ Subscribe to my mailing list. Follow me on Twitter. Original blog post: https://www.bernardjan.com/post/postcards-from-beyond-reality-blurb-and-ebook-cover-reveal

I did it! For the first time. I discounted all my books to ONLY $0.99! It is my gift to all my readers, reviewers, and supporters, to all of you who loved one or more of my stories, and to all of you who will yet become their fans. Check out the dates and links below for these fantastic discounts. Sunday, December 26, 2021, 8:00 AM PST through Sunday, January 2, 2022, 12:00 AM PST Cruel Summer January River Look for Me Under the Rainbow A World Without Color Grab this unique opportunity and don't look any further. Thank you for your love and support, and please don't forget to leave your honest reviews. It can be just a one or two-sentence honest thought or impression. May the new 2022 year bring you everything you wished for and 2021 denied to you, and even more! Happy Holidays! BJ Original post: https://www.bernardjan.com/post/a-holiday-all-books-sale

TCK Publishing Reader's Choice Awards 2021 contest is over and so is the eight months long competition for my novel Cruel Summer. After a tough “fight” in which Cruel Summer was also in the lead for a few months, it ended up 2nd in YA and Middle Grade book category with 265 votes. Only in the last few weeks the one book beat it in winning the title of the best YA and Middle Grade book in the fifth annual Reader's Choice Awards, with 104 books competing this year. This is a great achievement. I am proud of my book and grateful to everyone who casted their votes for it! It's been a great experience and thank you all for making this competition so exciting! BJ Original post: https://www.bernardjan.com/post/cruel-summer-2nd-in-the-tck-publishing-contest

Cruel Summer won the Honorable Mention Award in the Young Adult–Social Issues category in 2021 Readers' Favorite International Book Award Contest! Readers' Favorite recognizes Cruel Summer by Bernard Jan in its annual international book award contest, currently available at Amazon here. The Readers' Favorite International Book Award Contest featured thousands of contestants from over a dozen countries, ranging from new independent authors to NYT best-sellers and celebrities. Readers' Favorite is one of the largest book review and award contest sites on the Internet. They have earned the respect of renowned publishers like Random House, Simon & Schuster, and Harper Collins, and have received the “Best Websites for Authors” and “Honoring Excellence” awards from the Association of Independent Authors. They are also fully accredited by the BBB (A+ rating), which is a rarity among Book Review and Book Award Contest companies. Readers' Favorite receive thousands of entries from all over the world. Because of these large submission numbers, they are able to break down their contest into 140+ genres, and each genre is judged separately, ensuring that books only compete against books of their same genre for a fairer and more accurate competition. They receive submissions from independent authors, small publishers, and publishing giants such as Random House, HarperCollins and Simon & Schuster, with contestants that range from the first-time, self-published author to New York Times bestsellers like J.A. Jance, James Rollins, and #1 best-selling author Daniel Silva, as well as celebrity authors like Jim Carrey (Bruce Almighty), Henry Winkler (Happy Days), and Eriq La Salle (E.R., Coming to America). “When the right books are picked as winners we pay attention. We will be spreading the word about Readers' Favorite.”—Karen A., Editor for Penguin Random House Readers' Favorite is proud to announce that Cruel Summer by Bernard Jan won the Honorable Mention Award in the Young Adult–Social Issues category. You can learn more about Bernard Jan and Cruel Summer at Reader's Favorite where you can read reviews and the author's biography, as well as connect with the author directly or through their website and social media pages. “Bernard did a wonderful job of creating a beautifully written and compelling story that is very descriptive so that the reader feels immersed in the story. I enjoyed the detailed skateboarding stunt instructions at the start of each chapter. His characters were brilliantly written and very compelling.”—Rolanda Lyles for Readers' Favorite Please check out Cruel Summer at BookAwards.Com. Thank you. BJ Subscribe to my mailing list. Follow me on Twitter. Original post: https://www.bernardjan.com/post/readers-favorite-honorable-mention-award-for-cruel-summer 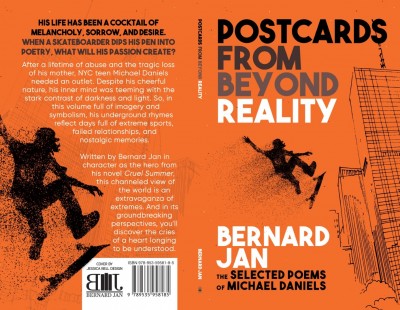 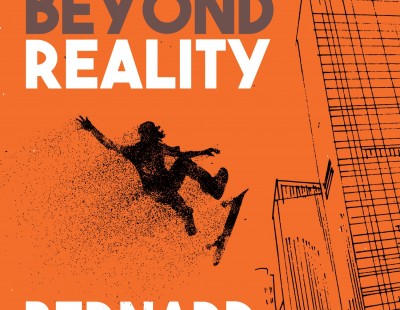 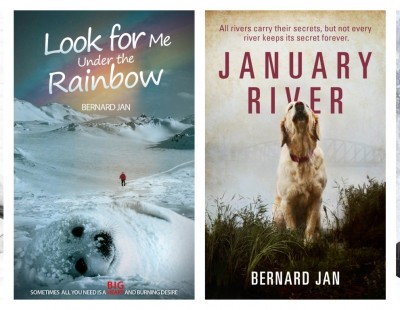 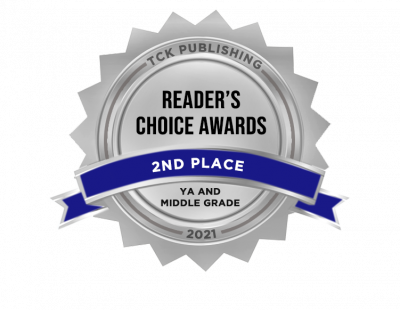 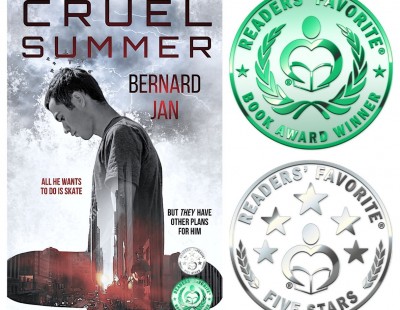 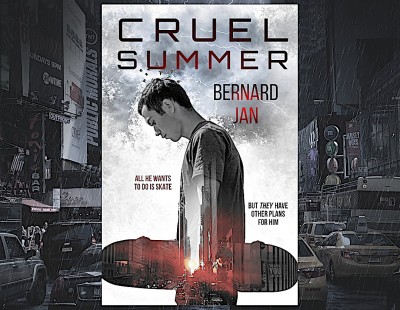 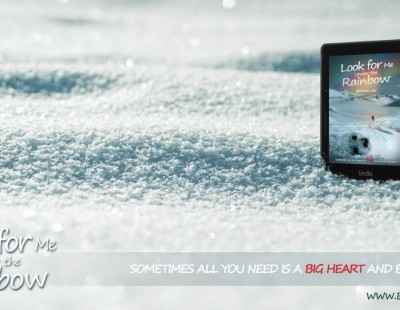 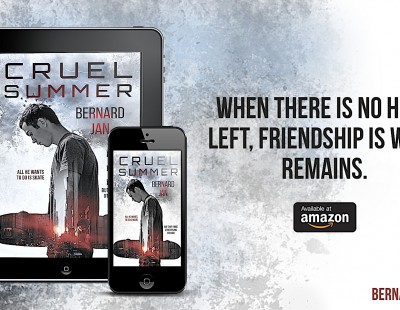 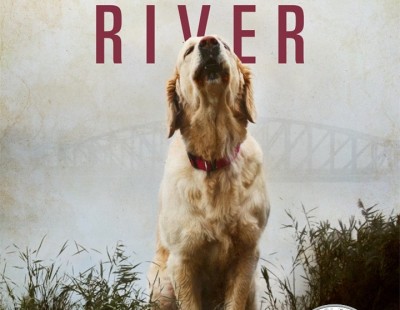 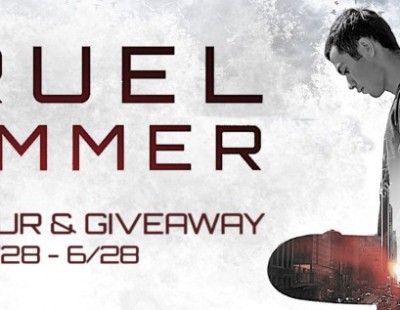 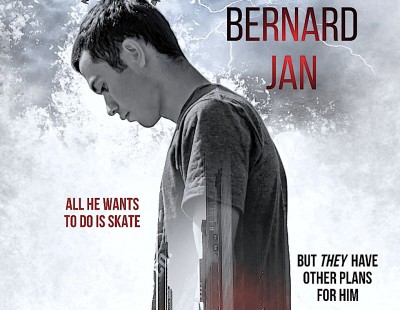 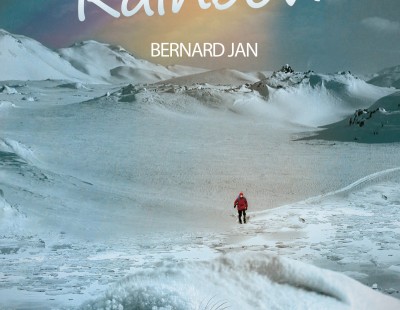 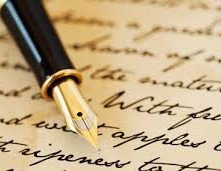 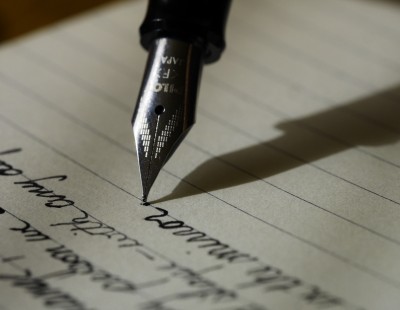